Wednesday evening saw the culmination of a project which began a year ago when Bristol photographer Colin Moody and community arts group the People’s Republic of Stokes Croft found themselves bemoaning the restricted and stereotypical images of Bristol seen in holiday postcards. A competition was mooted and the city invited to send in alternatives along the lines of  No more suspension bridges, easy on the balloons.

A set of finalists was chosen and the winning entry (Big Jeff by Paul Blakemore) decided by a public vote last January. However Wednesday was the public presentation of prizes and the first chance to buy postcards, singly, in sets or as bigger prints. 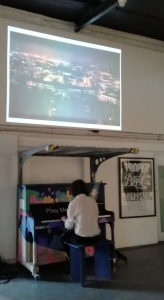 There was a really good vibe at the launch event with a piano player helping things along as slides of all the competition entries, not just the finalists, were projected above him. This was a nice touch that recognised everyone’s contribution and showed the quality and range of the entries, upbeat, downbeat and off-beat, from conventional city views with a twist,  to ironic juxtapositions and downright craziness.

Chatting to Colin after the official speeches he was at pains to emphasise the democratic and accessible nature of the project with the official judges as diverse a group as possible and final voting spread around city venues so that anyone could get involved – no internet required!

Several of the finalists were also at the show  including Daniel Durrans – (whose  Bristol July 2017 and Bristol July 2018 both made the final selections) and Phoebe Flint whose M32 Comfort Break was one of three adult runners up.

Finalists were each presented with a parcel of postcards which it’s hoped will be posted far and wide and start to change the image of Bristol around and beyond the city. And this is where you come in! Postcards will soon be on sale very soon from the People’s Republic of Stokes Croft Shop and hopefully city tourism outlets.

Once you have your postcards we want to see where they end up! Please send them all over the world – from Sydney to Swindon, Cheddar Gorge to the Grand Canyon – and get people receiving them to take a picture of them arriving in these amazing places. Share these pictures with us and let’s get Bristol on the global map!
Email the pictures to projects@prsc.org.uk, or tag @peoplesrepublicofstokescroft on instagram.

So what’s stopping you? Buy a postcard, send it out and you will be part of making Bristol’s future  in the eyes of the world. I have mine already.

Here’s a slideshow of the complete collection.

Many thanks to Colin Moody and to Lisa of PRSC  for talking about this project and its origins and for their warm welcome to the People’s Republic of Stokes Croft.

Finally, for those who still espouse sliver based (now I know what to call it!) photography, there’s a show on now at Bristol Guild by Martin Edwards. Just hoping I can get along to it between now and June 15th. 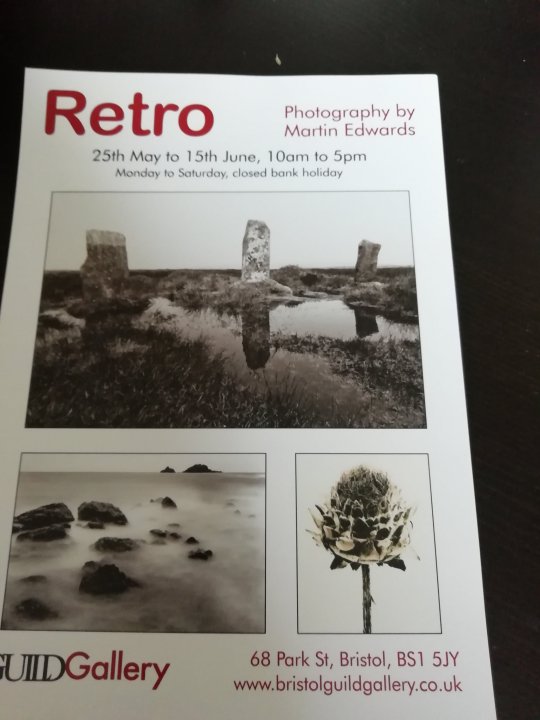