This month I’ve unexpectedly stumbled on two novels featuring photography to add to my growing  blog category ‘photography in fiction’. These writers are less well-known than Theroux or Boyd but there are points of similarity worth mentioning. 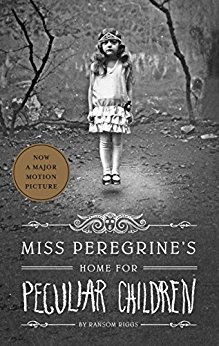 Miss Peregrine’s Home for Peculiar Children which I was given as a gift, follows William Boyd’s idea in Sweet Caress of using ‘found photographs’ and building a story around them. However Ransom Riggs has chosen a very particular set of ‘trick’ photographs from (I guess)  the early 1900s, which vary from slightly odd to very bizarre or even slightly horrific. I liked the start of his story a lot: teenager Jacob, traumatised by his immigrant grandfather’s violent death, goes looking for the children’s home where his grandfather grew up and whose owner (Miss P) still seems to be alive. Jacob’s relationship with is grandfather is convincing as are his arguments with other family and friends. However once he reaches West Wales – again convincingly drawn – the novel plunges into a mixture of time-slip and fantasy . The time-slip plot certainly hangs together, with Jacob falling for the grandfather’s girl-friend  in a very believable way. However it turns out the ‘peculiar children”s peculiarities are real: – a girl can levitate, a boy can bring dead heart’s back to life, another girl is super-humanly strong, and in the end Jacob to has special powers he didn’t know about. Somehow it all got a bit much, or maybe I was just thrown by the lurch into Dr Who territory after the realism of the beginning. (Promise to the reader?) To be honest, here’s a book about photographs I would have preferred without the photographic element! By the way, I’ve just discovered this was made into a film directed by Tim Burton, but from the reviews I don;t think I’ll be searching for it.

The Photographer’s Wife by Nick Alexander  is a more conventional novel set between World War 2 and the present day. Unlike Miss Peregrine I didn’t like the beginning at all, but it grew on me and proved an excellent companion on a trip where I had chunks of  time to myself. This is a novel of two generations and I think it was my lack of interest in present-day Sophie, aspiring art photographer with a slightly pervy (as even she admits) boyfriend which put me off. It was also a while until we got the connection (I know it was obvious and but still felt like a long time in coming) with Barbara, growing up in the London blitz who eventually marries a photographer – Sophie is their second child.  Barbara is very much a child of her time and her story carries the novel through the sixties and seventies. Her hurried marriage to Tony was in a sense doomed from the start, but Barbara never waivers in her belief that it’s worth saving despite Tony’s behaviour which veers from impracticality to downright mental cruelty. I couldn’t help feeling another writer would have had Barbara strike out on her own, but  her obstinate support of her family and loyalty to her husband becomes her strength (and is true I think to her times). The problem is that she has never shared the truth of her marriage with anyone, certainly not her daughter. In a sense the photography is not central to the story – I mean it could have been any artistic endeavour – and I did cavil at the idea ‘art photography’ did not exist in the fifties and sixties, but having said that, Tony’s job as a press photographer and Barbara’s role in it is perfect for the era with both the artistic and technical side given plenty of scope. Similarities with Theroux’s Picture Palace? Family secrets abound in both and the catalyst is a retrospective of a photographer’s work. The styles are entirely different with this one  much less literary (I hope no one asks me to elaborate on that judgement!) but despite its flaws (mainly structural – beginning to slow and the twisty end a bit too fast for me) there is a lot to like in The Photographer’s Wife and I would happily recommend it as a quick and engaging read. I might also take a look at what else this author has to offer.

Meanwhile thank you to Clare Weiner (writing as Mari Howard) and Debbie Young for two fabulous reviews of In the Blink of an Eye which has been entered for the prestigious Sir Walter Scott Prize for Historical Fiction.

Nothing more I can do except keep everything crossed!