I’m just back from the Comedie du Livre, an open air book festival in Montpellier, France which runs over three days and isn’t quite like anything I’ve attended in the UK. Yes, it’s a literary festival under canvas but somehow not like Hay-on-Wye.  Although there are guest speakers giving talks on two small festival stages , the biggest space (under a lovely avenue of trees right next to the town’s main square) is given to individual bookshops  and these bookshops invite authors to sign books and boost sales.Which is how I ended up there with Lynn Michell of Linen Press as guests of Le Bookshop, Montpellier’s only anglophone bookseller.

Arriving on Friday evening we were quickly taken with the town as a whole (everything from medieval old town through Parisian-style boulevards not to mention very funky trams!) but I wasn’t quite sure what to expect of the fair itself. Would anyone in south west France be interested in English books never mind Scottish historical fiction? How would we fare alongside popular titles in French not to mention massive English titles like Harry Potter, Eleanor Oliphant  and that one about adventurous girls? All I can say is I was very pleasantly surprised by the response to Linen Press. They had their  best sales ever at La Comedie this year. How did others do? No idea, as we were far too busy to notice! 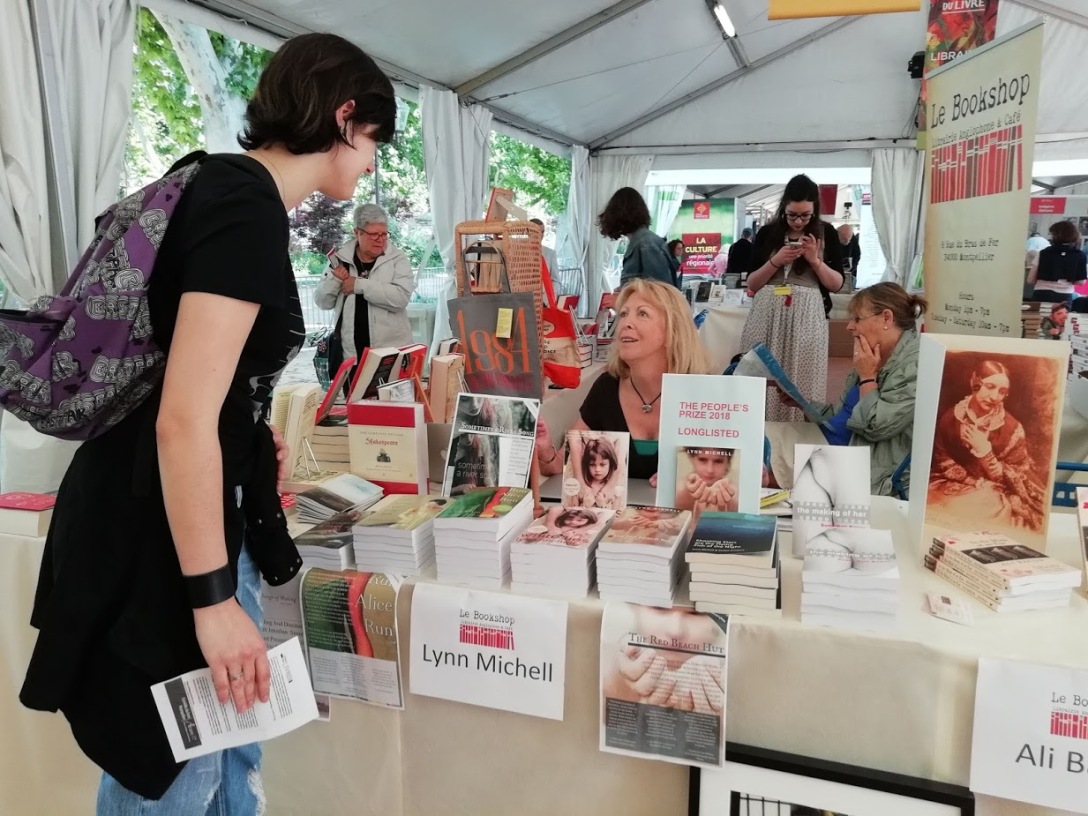 Two things in particular surprised me – first of all the open-mindedness of our customers to looking at something completely new. We sold Blink mainly to English speakers – holiday-makers, ex-pats, students/academics of several nationalities and a sole Scot from Aberdeen. But there were quite a few French speakers talking to us who admitted to having rusty English but  were happy to be talked into Lynn’s The Red Beach Hut, White Lies or In the Blink of an Eye itself.

I think it helped all of these have great covers and I had taken along the usual suspects in the form of my calotype reproductions, which made a great talking point. But all the same, few of our buyers had any knowledge of photo-history. I was quite shocked that none of them even seemed to have heard of their countryman Louis Daguerre, not that this held them back from thinking about a purchase.

In fact, very few customers, once we had caught their interest, objected to the price, so I assume that 15 Euros (gulp!) is unexceptional in France for a paperback – or at least for one that you really want. This made me do a quick piece of research which reveals France, unlike UK, still has a fixed price for books. I’d almost forgotten that once upon a time books were not discounted here either. It’s quite a while since the UK gave up the Net Book Agreement and maybe it’s only now I can see how it has worked against small publishers who can’t offer massive discounts required by big retailers.

Possibly it’s not just a money thing but a cultural difference that led all kinds of people  to us under the lime trees, willing to take a punt on something a bit different and ready to give authors, publishers and booksellers a reasonable return on their efforts. Whatever the reason, Vive la France!

Here’s something else that happened while I was away.
I’m delighted to say that following their huge success two year’s ago with Avril Joy’s Sometimes a River Song I’ve been entered along with The Red Beach Hut for a revamped  People’s Book Prize, an award which tries to counteract the elitism of many literary prizes by putting the result in the hands of the readers. Yes, it’s one of those voting things.

A literary X-Factor? I’m not quite sure, but I’d love to maintain Linen’s success here as well as giving Blink all the help it needs to gain more attention. The website launches today so I’ll be taking a good luck at how voting works . Expect to hear more from me about this very soon!