My home town of Dunfermline may only recently have acquired a Heritage Quarter but it has never lacked heritage: King Robert the Bruce of Bannockburn fame has his name emblazoned around the abbey tower;  more recently Andrew Carnegie lavished quite a few of his millions on the place of his birth, equipping us with the very first Carnegie library and the first public swimming pool in Scotland. 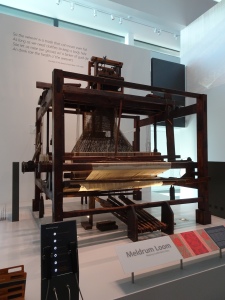 In my childhood these were our local heroes but the town’s  twentieth century economy was more mundane – coal fields and textile mills. The pits were at a distance and by the sixties linen weaving had given way to silk and man-made fibres, but the clank of the power looms was never  far away , something I had come to remember while writing In the Blink of An Eye:  one of the main characters had her roots here with her father and grandfather working in the linen industry. It was only after being invited to talk at the Undiscovered Dunfermline Conference soon after signing  with Linen Press that I noticed the pleasing symmetry!

I was delighted to be invited to the event and promised Dunfermline Community Heritage Projects  I could talk ad infinitum about the historical figures who inhabit my book, but I admit that as the day grew nearer I had quite a few qualms.  I have read my work at quite  few events, but organising my research for a formal presentation  was a different matter. Then there was the small matter of my new PC dying on me at the crucial moment (is there any other kind?) My novel was safely backed up  but not so my 40 Powerpoint slides! Luckily the thing spluttered back into life just in time for me to haul all the important files to safety.  Eventually it was done – the presentation that is – and I could  look forward to my trip north with the bonus of seeing the newly opened  Queensferry Crossing on the way.

Dunfermline has changed a lot since the seventies but I must say most of the surprises were pleasant ones, especially the fabulous award-winning Dunfermline Carnegie Library and Galleries (incorporating library, archives, museum, and art gallery)  where Undiscovered Dunfermline took place, and if I was slightly daunted by the Hollywood proportions of the projection screen, it was lovely to have jacquard patterned panels around the walls of the room to emphasize all that linen heritage.

As for the talk itself, after some fascinating insights into little known Dunfermliners from the other speakers, I was suddenly aware that my audience were likely to know more about my subject than I could tell them. Luckily those who did were happy to share their knowledge, and I got the impression that most people learned something new, with some very heartening feedback afterwards.

In retrospect I’m grateful to DCHP and Jack Pryde of Discover Dunfermline,  not just for the publicity opportunity but also the chance to renew some old acquaintances and see how my home town is faring in its post-linen era. It was also a great chance to brush up my presentation skills.  I’m hoping to do more of this kind of thing after Blink has been released into the world – though maybe not (note to self) using all of my forty slides at one go!

Sunday followed – ideal for taking in some old haunts, more delights of DCLG and of course a walk in the Glen (look hard and you might just see the new bridge beyond the trees). 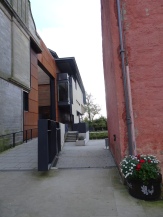 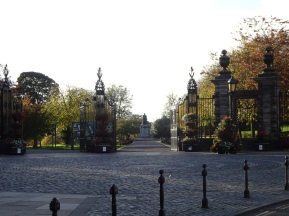