Phew! Quite a lot of action was packed in to National Libraries Week so here’s a run down.

On Tuesday I’d offered to help with a celebration taking place at my small but beautiful local library in Emersons Green. My official job was to lead a pop-up book club discussing Susan Hill’s novel of 2008 The Beacon – a short but intriguing novel I had hastily consumed over the weekend. But arriving  early (in too much of a hurry to read the programme!) I was in good time to get a feel for all of the activity going on and to see how a Radio Bristol show (broadcasting from a different library each afternoon of the week) was set up. 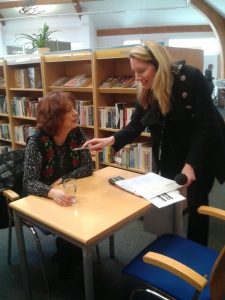 In fact it was all done very quickly and efficiently by Laura Rawlings and her friendly producer who even stopped to admire the Unchained display I had  done in the foyer and offered me a spot later in the show.
This is Laura preparing with special guest Bel Mooney who spent the afternoon in the story corner while the life of this busy library went on around her.

In fact that was the tone of the whole afternoon, people going about their business with, thankfully,  no hint of a media circus. The  book group was highly enjoyable too with as many interpretations of the end of the book as there were readers – and heated views on some of the characters – just how a book group should be.

By the time we had finished, the broadcast was nearly at an end, but Mr Producer was still on the look-out to fill the final slot, and I was thrust in front of the microphone, ready to gush on the wonderfulness of libraries, or, if necesary, of a certain library anthology. I was just a bit disconcerted when instead Laura asked me to talk about A Kettle of Fish. (Well I am only the author!) I didn’t quite flounder, but I can’t say it was the best thought-out pitch I have ever done – but then it wasn’t really the moment for a hard sell, was it?

On to Saturday, when another local writer Pauline Masurel and myself had a really warm welcome at Winterbourne library and a lovely chatty audience for our Storytelling for Grown-Ups session. It was fun for us too, as each of us was new to the other’s writing. (If that makes sense!)

If you didn’t make either of these events, you can read some of my thoughts on NLD and what it means to writers on the official blog.

And finally! With National Libraries week done and dusted, Bristol Women Writers have another event in the pipeline – a free writing workshop on February 27th.