Last week someone – not a writer -asked how my current novel is going, and I tried to explain that I knew what events were going to take place, but was still struggling to write the rest of it. Oh, she said, so you know what will happen, you’re just padding it out? Well I couldn’t deny it, but padding has such a bad name, and the more I think about it the more I realise it’s the ‘padding’ that makes a novel what it is. I don’t mean meaningless bulk – empty description or redundant characters that only add to the wordcount, but all the richness of detail, the texture and the layers,  that make an engrossing read and keep the reader waiting to find out what will happen at the end. 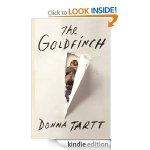 For instance! It so happens I’ve just read the fabulous Goldfinch by Donna Tartt (good deal on Kindle right now)  and I could probably sum up the plot in a few (longish!) paragraphs, but despite its 700 pages I’m sure I couldn’t find a single passage which could be regarded as pointless padding. Descriptions, for instance,  are terse but vivid. There are a host of characters, major and minor, but all of them has some vital role to play in orchestrating a long (although not overly complicated) story.

Because this is a story that takes as long as it takes. And that’s where the novelist’s art lies, I have decided, in looking not at the big events, but in writing all the tiny moments, the touching, comical, or in this case frequently drug-fuelled encounters that the hero has with his own thoughts or with his various companions.

You can’t eke a story out (and that’s what we’re trying to do)  without building characters, and in this case none is more memorable than the rollicking hell-raiser Boris, the kind of friend whose potential for disaster is only matched by his stellar ability to get out of it again. But exploring a character like this – or any of the other characters – takes time. They will eventually drive the plot but we need to know them first.

So what I have learned is that I need more patience. I shouldn’t be worrying about how quickly I can get to the Next Big Thing in my novel but getting the reader there with the right knowledge and in the right frame of mind. How long it takes does not actually matter, and progress should be measured in the building of characters and relationships, not in how far along the timeline I have progressed. There’s no point rushing the reader, because the big reveal gets its potency from what has gone before, from making the reader wait.

12 thoughts on “In praise of padding (the good kind)”