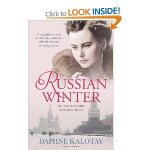 I was sent a copy of Daphne Kalotay’s Russian Winter some time ago and for some reason it languished on my shelf, not rejected but simply neglected, until a passing friend happened to mention she was stuck for something to read. Try this, I said, and tell me if it’s any good. Within a few days she said how much she was enjoying it and at our monthly reading group she was so clearly taken with it, I made a plea for ‘no spoilers’ and  started reading it straight away. I have to say this really is a gorgeous book and exactly the sort of thing I like.

It’s about three people all living in present-day Boston: Nina a ballet dancer who defected from Stalin’s Russia who has decided to auction off her stunning collection of jewellery; Drew, the young representative of the auction house handling the sale, and Grigori, an academic who’s life work has been the translation of the poems of Viktor Elsin, the husband Nina left behind in Moscow and who did not survive the Stalinist terror. But if Nina can rid herself of the jewels, the act of doing so sirs up searing memories. Grigori too, an adopted child still mourning the death of his wife, has never come to terms with the mystery of his Russian birth parents and the fact that Nina has always refused to acknowledge any connection to him. Through all three characters the story of Nina and her life with the Bolshoi Ballet under Stalin unfolds at just the right pace until a whole skein of false assumptions is unravelled and a new set of connections revealed.

What do I like about it? The narrative,  carried entirely by the main characters, is taught, but absorbing rather than gripping, allowing us plenty of time to see the lives of other characters like Grigori’s friend, the dissident poet Zoltan, Nina’s fellow dancer Polina who is prey to constant anxiety and fear, or Viktor’s aristocrat mother (a kind of white Russian Miss Haversham) whom he has to hide behind a plywood wall. The story has many layers but everything is germane to the themes of how  love and loyalty are compromised under a reign of terror.  And by the end I knew so much more about Stalinist Russia, the life of a ballerina and even amber jewellery.

It’s interesting to ask why I didn’t pick this book up sooner. I certainly think the title is bland, and the cover similarly conventional. Nothing about the appearnce of the book stands out, which goes to show how much these things count. Of course this is a conventional novel ,  but in a good way. It delivers in all it sets out to do and I found it entirely satisfying. Who could ask for more?