I met Sheryl Browne at a reader/writer event last summer but only got round (you know how it is!) to reading any of her work last week. I’m glad I did though, because although I only do romcom once in a while I did enjoy this one, particularly for the way it deals with one of our big contemporary issues  along its light-hearted way. I’ve already reviewed the book on Amazon and today Sheryl is here to tell you more about it and how she came to write it – it’s a great story too so do read on.  Over to you, Sheryl!

Thanks so much for inviting me along today to help me launch A Little Bit of Madness, my fourth Romantic Comedy published through Safkhet Publishing, and asking me to share a little about my writing career.

The question is actually quite opportune, because A Little Bit of Madness is dedicated to my mum who, sadly, I lost in my twenties to early onset Alzheimer’s.  My first attempts at novel writing started around about then and were, I think, a kind of catharsis.  Losing my mum in my twenties was devastating, of course (it is any time), but I found my way of coping was to remember the quirky, hysterically funny moments we had (and we did, much to the bemusement of my father, who just didn’t get women’s SOH.)  Anyway, long story short, my first book got picked up by a top London agent (who will remain nameless).  Sadly, it didn’t get picked up by a publisher… sniffle …but the bug had bitten.

Spurred on by the fact that I had attracted the agent’s interest, I kept writing, took all advice on board (and I would just like to mention here that often agents and publishers took time – a precious commodity, particularly in today’s tough publishing climate – to offer such advice, most of which was constructive and all of which was appreciated), kept submitting – even through the rejections – and, eventually, my current  lovely publisher, Safkhet Publishing, decided they liked my style and asked me to write Recipes For Disaster for them.  I couldn’t have been more thrilled to have been given the opportunity to work on that unique book, which includes some really fabulous, different and fun recipes.  I was so nervous waiting for their initial feedback I’d almost bitten my fingernails down to my elbows.  And then they said Yes!  Music to a writer’s ears.

Thereafter… Well, production at Safkhet apparently having ground to a halt because the editorial staff were too busy falling about laughing at my work to do any actual work, they decided the LOVED my writing style; so much so they opened a whole new imprint for my books!  A three-book contract soon followed.  First off the press: Somebody to Love, a romantic comedy centring around a single father’s search for love and his autistic little boy. Next came Warrant for love – Blackmail, lies, adultery, entrapment – three couples in a twisting story that resolves perfectly.   And here I am, about to launch A Little Bit of Madness.

As mentioned, I write romantic comedy, mostly because I can’t seem to write without injecting humour into my story.  My hope is to allow people a little escapism and also to leave the reader with that all-important feel-good factor.  I do, however, like to write about real people, dealing with real life events, someone the reader identifies with and wants to get to know.  A ‘boy meets girl, boy gets girl, despite all obstacles’ story portraying characters readers can relate to and laugh with as they fall over those obstacles – because the reader is empathising with the character, because they’ve been there.

Bearing in mind real people then, along with changing population demographics, in A Little bit of Madness, I aimed for a multigenerational read.  Alongside my hunky but flawed hero and my feisty yet vulnerable heroine, therefore, I’ve starred a cast of people of the Queen’s generation, or as Celia – our heroine – prefers to call them, her elderly independents: people who have life skills you couldn’t possibly learn from a book and who still have lives to live and something left to give.

I’ve written the book.  My publisher still loves my writing – thank you Safkhet!  Now comes the nervous nail-biting bit.  Will the readers love it, too??  I hope so. Having seen a sneak peek of an upcoming review, I think so.  He’s a teeny snippet: ‘This book had me laughing so hard at the antics of the elderly characters…’  I won’t say more for fear of spoilers.  I have, however, popped the blurb and a brief excerpt below.  Ooh, I do hope you enjoy!  Thank you so much for reading! 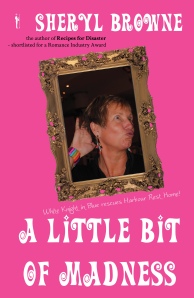 A Little Bit of Madness

Celia Summers, intrepid mother of two, is too cuddly for sweatpants, she suspects. But then, her class at The Harbour Rest Home are similarly clad. Celia loves her work as an art therapist. She’s proud that she gives her elderly independents something to look forward to, even if her partner, Martin, disapproves of her efforts. He also has other things on his mind – telling complicated lies to Celia so he can sell Charlton Hall, his mum’s house, to pay off his debts. Meanwhile, Celia fights to secure gallery space for her geriatric charges’ artwork, and to keep The Harbour from being closed. She’s even ready to abseil from a church steeple to bring attention to the plight of her old people, no matter that she might fall and end up splattered all over the flagstones. When she does fall, however, it’s much more painful – in love with PC Alex Burrows. Will he be her white-knight-in-blue and ride to her rescue?

‘I think I might be able to assist. Excuse me, dears.’ May squeezed between them, potty in hand. ‘There,’ she said, opening the window and chucking the contents out. ‘That should cool their ardour.’
‘Oh my  God.’ Celia gawked. ‘May, I can’t believe  you just did that!’
Eleanor laughed. ‘Relax, Celia. He hasn’t been assaulted quite as rudely as you think. It’s tea, not pee.’
‘I’ve been practising.’ May nodded importantly. ‘It’s not as easy as it looks, you know, making huge potfuls and getting it right, especially when it’s orgasmic.’
‘Organic, May.’
‘Oh, don’t be such a baby,’ Celia shouted through the window, as Martin gave an outraged screech and clutched his shirt from his chest. ‘It was tea, not pee.’
‘It was bloody hot!’ Martin looked up, po-faced. Appropriately, Celia thought. ‘She could have seriously injured me, the silly cow. Come on, Celia, see sense and come out before something awful happens.’
‘It already did, Martin. You happened.’
‘Fine. Have it your own way,’ Martin snapped, ‘let’s see if the police can persuade you, shall we?’ With great fanfare, he flicked open his new mobile, and whoosh, in an instant it was gone—swept away on a cloud of fire extinguisher foam.
‘Yessss!’ Celia did a little twirl on the landing. ‘Well done, Eleanor!’
‘That is it!’ Martin shouted through a face-full of suds. ‘I’m going to find a public telephone. The police will be here in minutes, Celia. You’d better get out under your own steam, while you still can!’
‘Do what you like, Martin,’ she called, as the two men in suits climbed from their vehicle, now parked behind Martin’s Jaguar. They’d had the good sense to stay out of the line of fire until now. ‘We’re not budging. We’re not even prepared to talk until we get assurances no contracts have been exchanged!’
Let him chew on that for a while, Celia thought as she turned away. Damn! The bailiffs! She realised they could split up at any moment and bolted downstairs, missing the last step from the bottom to land in a heap.
‘Ooh bloody, bloody Martin.’ Celia crawled up the banister and limped on, sure at least one of the bailiffs would be trying to gain entry at the back by now. ‘Batten down the hatches,’ she shouted, stumbling into the kitchen.
‘All battened m’dear. Blighters won’t get in here,’ the colonel assured her, walking stick ready to thrash any hand that might nudge through the cat-flap.
‘Mum,’ Luke yelled from the front hall, ‘it’s Alex.’
Oh no. Celia’s heart plummeted. Why, why, why, if he cared about any of them, couldn’t he have turned a blind eye, bunked off work, done anything but be involved in their eviction?
‘Where?’ She raced back toward the front hall, ready to dish out the same treatment to him as they had Martin, except, um, it seemed someone already had.
‘Here,’ said Alex, meeting her in the hall looking disarmingly Colin Firth-ish. Shirt plastered to his chest, his new shoes sloshing water as he walked, his expression one of total exasperation.
‘Who let you in?!’ Celia stared at him flabbergasted.
‘Luke,’ Alex supplied. ‘On the condition I told the bailiffs to back off and in the hope I wouldn’t drown, I imagine.’
‘Good God!’ The colonel blinked his monocle-free eye. ‘Not raining is it, lad?’
Alex sighed. ‘Torrentially. You might want to point out to May that hosing down policemen isn’t the best way to proceed if she wants to avoid a visit to the station.’

Sheryl is a loveahappyending featured Author and Editor.
Twitter: @sherylbrowne

8 thoughts on “A Little Bit of Madness”